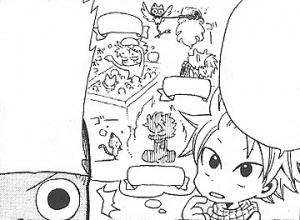 When Lucy Heartfilia mentions that the price of firewood has gone up, Natsu Dragneel thinks about how he doesn't have to spend money because he can heat things with his fire magic and has a Dream Sequence where he is shown doing various things that involve heating one of which is of him taking a Bath in a Unit Bathtub with Happy that he has heating up himself.

This chapter was released on June 17th, 2011 as an extra exclusively for the special edition of volume 27.

This omake was not adapted in the anime and is exclusive to the manga series.