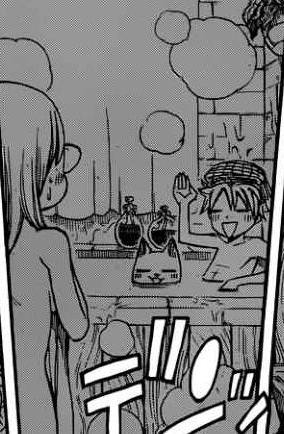 During a series of flashbacks Lucy Heartfilia has of the times Natsu Dragneel has invaded her house, one of them is of her finding Natsu bathing in her bathtub with Happy the cat. Natsu is in the bathtub resting his arm on the edge with his scarf on his head like a Wash Cloth and waving to Lucy. Lucy who was going to take a bath at the time is shown in the corner naked holding a towel with a surprised look on her face.

This omake chapter was first released in Weekly Shonen Magazine on November 20th, 2010. It has only been compiled exclusively in the special edition of volume 35 released on November 16th, 2012.

This chapter was adapted into the 4th episode of the Fairy Tail OVA as a minor flashback part of discussion Lucy was having with the other girls in an Onsen scene that was an adaptation of chapter 261. The only notable differences in the anime version is the typical differences in the design of Lucy's bathroom between the anime and manga, more of Lucy's body is visible and that Lucy is standing at a farther back distance from the part of the tub that Natsu was in.