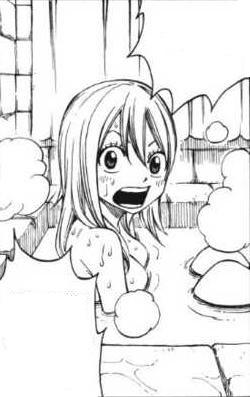 Lucy Heartfilia has a bath at her house while Natsu Dragneel and Happy the Cat wait for her to get out. Most of Lucy's bath is off screen while Natsu and Happy accidently wreck one of Lucy's books. Lucy's small amount of time shown bathing was when she responds to Natsu and Happy's request to borrow the book to cover up the fact that they wrecked it.

Later on in a Flashback after Lucy finds out about the incident with her book, an off screen moment of the bath scene was shown where Lucy was excited to hear that they wanted to borrow a book that she secretly wrote but it was only a cover up and that was the only reason why they wanted to borrow it.

This chapter was not adapted into the Fairy Tail anime series and remains exclusive to the manga.