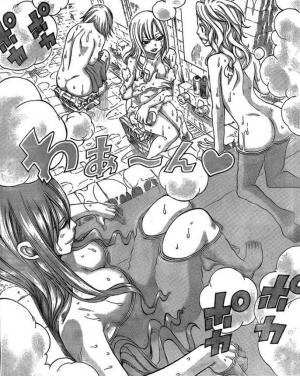 While Lucy Heartfilia was exploring Fairy Hills, the girls dorm for members of Fairy Tail, she was told that the treasure could be in the attic where she finds a peep hole that goes into the dorms Public Bath. When she looks inside she sees that the bath is occupied at the moment by Erza Scarlet and Levy McGarden who are in the bathtub and Juvia Lockser and Bisca Mulan are outside the bath washing themselves. After what looks like Levy and Bisca talking to each other, Levy is shown getting out of the bathtub while Juvia is faced in another direction covering her breasts saying that this is embarrassing and she would rather have a Shower in her room which Bisca responds that its ok because they are all girls. Levy is then seen Shampooing her hair while telling Erza who is now Standing In The Bath that she should have invited Lucy to join them while Erza said she already invited her. After Erza is out of the bathtub, Lucy thinks to herself that this would only be a treasure for a boy but then finds out that the peep hole was not the treasure.

This chapter was first released in November 20th, 2009 in Weekly Shonen Magazine. The chapter was later compiled into Fairy Tail S volume 2 released in Japan on September 16th, 2016 and North America on April 17th, 2018. 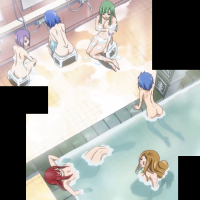 In the anime series, this omake was adapted as the first OVA. The bath scene included the same four characters with adding Evergreen and Laki Olietta to it. Also, rather than an Undermount Bathtub which was seen in the manga, the anime changed it to a Bathing Pool. The anime also added a secondary side plot involving the male characters at the guild's Swimming Pool that resulted in a Skinny Dipping scene.