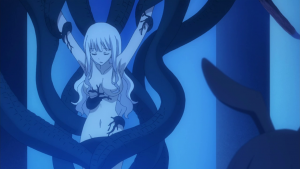 Mirajane Strauss is seen unconscious and naked being lifted into a Tube Bath by some tentacles in Hell's Core.

This specific instance of Mirajane Strauss in the Tube Bath shown in this episode is an early anime exclusive scene that sets up the later scene in episode 240 which was an adaptation of chapter 370.