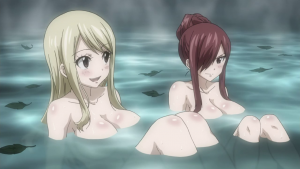 The night after the members of Fairy Tail return to Walrod Cken's house, the girls, Lucy Heartfilia, Erza Scarlet, Wendy Marvell and Charle go take a Skinny Dipping in a nearby Hot Spring that he told them about while the guys are cooking food at a fire back at his house. Erza is seen walking through the water while Lucy is already submerged into it. All three of the human girls are seen sitting in the water curling their legs as they talk about how nice it is to have a relaxing Bath after all the work they did in the Sun Village.