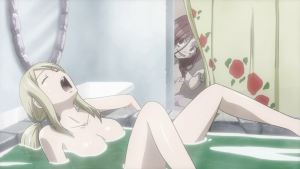 After Lucy Heartfilia and Wendy Marvell get saved by Flare Corona who says that she has been stalking Lucy ever since her former guild Raven Tail disbanded showing a series of Flashback images of her watching Lucy during her daily activities one of the being taking a Bath. The shot shows Lucy laying in her Bathtub filled with Green Bathwater possibly asleep or yawning with her left Arm Resting on the side and her legs spread. Flare is seen peeking through the curtain of the Changing Room wearing a pink Towel watching Lucy bathe and possibly getting ready to use this opportunity to get in with her Off Screen. Flare then tells Lucy that she was just kidding but due to the nature we already know of the her already following Lucy on many occasions and the specific flashback images we see it's possible that she was lying and really was stalking Lucy.

The bathing scene is an adaptation of the 347th episode of the Fairy Tail manga series. The differences in the manga are: