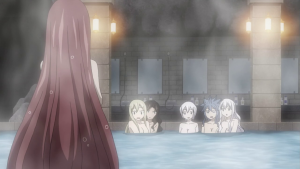 The episode begins with Lucy Heartfilia crossing her leges and taking a Bath in the new Fairy Tail Guild Bath's Bathing Pool with Cana Alberona who is having a Drink and Levy McGarden. Mirajane Strauss and Lisanna Strauss are both outside of the bath with Mirajane Shampooing her hair and Lisanna Arm Washing with a Sponge. The girls talk about how the guild has suddenly been getting alot of work with Levy saying that Jet and Droy let her have the day off and that they were going to handle their mission themselves. After a scene transition showing what Jet and Droy are doing, the scene goes back to the baths where we see Mirajane who has the shampoo rinsed out of her and is now washing her arm. We then see the males side of the bath where Max Alors, Warren Rocko and Romeo Conbolt are seen bathing when Elfman Strauss pops out of the bathwater frightening them. Laxus Dreyar who is outside of the bath is approached by Freed Justine who happily offers to wash his back for him. While Laxus is sitting on a Bath Stool and having his back washed by Freed, Bickslow shows up and asks if he can get his washed next but Freed angrily tells him no. Max, Warren and Romeo suddenly hear the conversation going on between Lucy and Cana in the girls side and its about how she heard from Happy that Natsu Dragneel touched Lucy's breasts. Over on the girls side we see Cana advance uncomfortably closer to Lucy and we hear over here grabbing and playing with Lucy's breasts off screen while we see the reactions to Max and Warren while Romeo is submerged in the water Overheating and Blowing Bubbles out of embarrassment of hearing that.

Levy who is awkwardly sitting right near Lucy being fondled by Cana in an envious state then looks over to Mirajane who is already in the bathwater and asks where Erza Scarlet and Wendy Marvell were and tells them that they are doing a job by themselves as well. Lisanna who is in the bath now as well questions who the red haired girl is over by the end of the bathing pool is. The red haired girl stands up in the bath and reveals herself to the girls to be Flare Corona a former member of the enemy guild, Raven Tail who has followed Lucy. Cana quickly trys to attack her but Lucy stops her telling her that they are no longer enemies. Flare then shows her new sign of friendship by using her to grab and bar of soap and offer to wash Cana down while on the males side Max, Warren and Romeo hear this session of off screen violating going on while Freed is now massaging Laxus back. Lucy now comes closer to Flare in the bath and talk to her and while this is going on, Juvia Lockser who is coming out of the Changing Room with only a Towel on getting ready to join them in the bath hides behind the door and watches all of this thinking that Flare has come to replace Juvia and steal Gray Fullbuster for herself. After Juvia's wild imagination stops, Mirajane is wearing a white towel in front of Juvia waving at her and getting her attention while Lucy offers to let Flare join Fairy Tail after her emotional speech but then she says that she doesn't want to join Fairy Tail shocking everyone.

This episode first aired on February 4th, 2015 on TV Tokyo.

This episode is adaptation of the 341st chapter of the Fairy Tail anime series. The scenes that show the males side of the bath are exclusive to the anime.