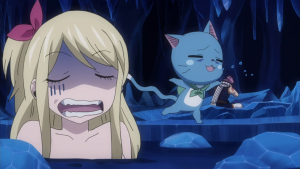 Lucy Heartfilia has a Dream Sequence while she is asleep in an ice cave where she wins an award for being a writer and her prize was a large Bathing Pool. Outside of the dream, Lucy sleepwalks and starts Stripping her clothes off and starts Skinny Dipping into a cold pond in the cave. As she dips her foot in and sinks into the water, her face shows signs of being cold but through the talking in her sleep, she seems to be enjoying a hot Bath in the dream. During Happy's dream, he is chasing fish in the sea and ends up jumping onto Lucy's head biting her waking her up. As she wakes up naked in the water she covers her breasts and the cave starts collapsing.

"Showers are fine, but there's nothing like a bath"
~Lucy Heartfilia (Japanese)

This episode first aired on February 21st, 2015 on TV Tokyo.

The entirety of this episode is not in the manga and is a filler episode exclusive to the anime.