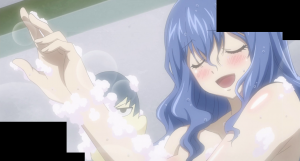 Juvia Lockser begins her day by taking a Shower in in her dorm room. She is washing her arms and legs with Soap and a Gray Fullbuster hand puppet. The hand puppet is then seen afterwards soaping up her breasts. When she finishes showering, she is seen drying off with a Towel that has a picture of Gray doing a thumbs up with the words "Gray Sama Love" written on it and starts drying off.

This episode first aired in Japan on February 14th, 2015 on TV Tokyo. 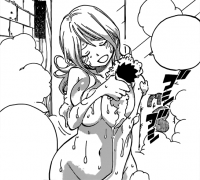 This scene was an adaptation to the 34th omake chapter in the Fairy Tail manga series. The anime significantly toned down the gratuitous fanservice of the original scene with most of the shots being up close face shots and removing any shots of Jyvia's buttocks. The point of view shot where Juvia is washing her breasts with the Gray hand puppet was a new scene added to the anime which seems to be a replacement for the shot of her Self Pleasing which was only in the manga.