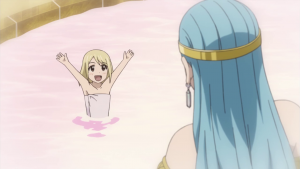 There is a Flashback Bathing Scene of Lucy Heartfilia as a child taking a Bath with Aquarius having a Splash Fight in a Bathing Pool of Pink Bathwater while wearing a Pink Towel. Aquaris gets mad at Lucy for always summoning her when she takes a bath and hits her with a tidal wave where Lucy is seen flying off with her Towel Dropping.

This entire episode is a filler episode that is exclusive to the anime and is not in the manga.