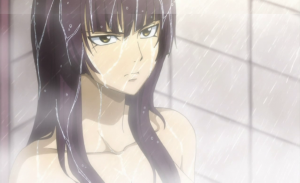 On the night of the Grand Magic Games third day, many of the other characters are shown with Kagura Mikazuchi being shown having a Shower.

This scene is shown in the episode preview at the end of episode 170.

This episode was adapted from the 290th chapter of the Fairy Tail manga series. In the manga version, Kagura takes a Bath instead of a Shower and it is inside of an Unspecified Freestanding Bathtub.