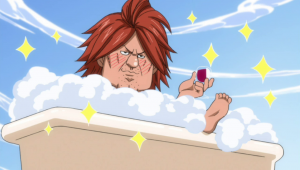 An illusion of Ichiya Vandalay Kotobuki taking a Bubble Bath in a Clawfoot Bathtub is shown during the fight between Rufus and Eve as Rufus uses a technique that projects his opponents memories showing that Eve accidentally saw Ichiya in the bathtub at one point.

This episode first ran on TV Tokyo on February 9th, 2013.

This scene does not appear in the manga and is an exclusive filler scene for the anime. This scene would have been in chapter 286 if it was in the manga.