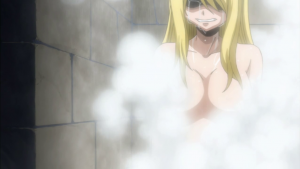 Lucy Heartfilia goes to take a Shower after losing her battle against Flare Corona. Apparently her shower lasts through at least the amount of time it took for the next 3 matches as she is seen still in the shower at the end crying.

This episode first ran on TV Tokyo on December 8th, 2012

This episode was adapted from the 273rd chapter of the Fairy Tail manga series. In the manga, the water drops are more detailed and there is less steam showing slightly more shape to Lucy's breasts. There is also a Towel Rack holding a White Towel in the background of the manga panel that isn't shown in the anime.