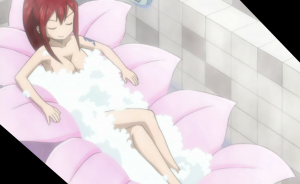 Erza Scarlet has a Bubble Bath in a flower shaped Clawfoot Bathtub while crossing her legs at the sleeping quarters of the Honeybone Lodge. After her bath, she inspects the rest of the room in only a White Towel to see if there is anything suspicious about the room. Later on Ichiya Vandalay Kotobuki is seen wearing a Bathrobe in his hotel room implying that he had an Off Screen Bathing scene.

This episode first aired in Japan on November 3rd, 2012 on TV Tokyo.

This bath scene is adapted from the 265th chapter of the manga. The differences between the anime and manga version was: