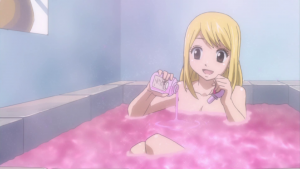 Lucy Heartfilia takes a Bath in a magical ointment that ends up turning her invisible.

This entire episode was not in the manga and was an exclusive filler episode to the anime.