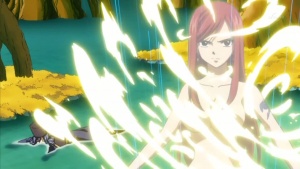 During the fight happening between Erza Scarlet and Meredy in the middle of a pond, Erza has an unofficial Skinny Dipping and Rain Shower scene as she uses her ex-quipping which briefly makes her naked to switch armors.

Erza transforms as she is charging to attack in the manga but in the anime she is simply standing when she transforms. In the manga it wasn't raining so Erza dosn't ends up having a Rain Shower during her transformation like in the anime.