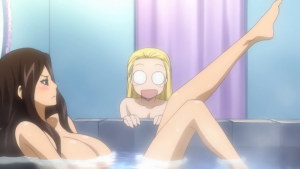 Lucy Heartfilia is at her house at night Shampooing her hair in the bathroom while humming and then turns on the shower. While Lucy is having a Shower she says out loud that it is great to be relaxing at her own house again, where she hears Cana Alberona's voice say that she has a great place here which Lucy agrees and then suddenly gets freaked out and sees that Cana is bathing in her Undermount Bathtub naked.

After the opening credits, the scene resumes to Lucy looking surprised at Cana having a Bath in Lucy's tub Leg Stretching and complaining that Lucy doesn't have any booze in her house. After a brief flashback Lucy has giving a monologue about who Cana Alberona is showing previous scenes in the series that involve her, the scene now shows that they are both in the bathtub together both Leg Curling to fit into it. Lucy and Cana then start conversing and Cana brings up that she might be leaving the guild and stands up in front of Lucy.

This episode first aired in Japan on September 17th, 2011 on TV Tokyo. 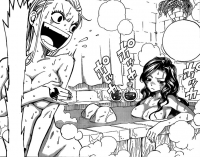 The manga version of this scene.

This bath scene adapted from the 201st chapter of the manga. The changes made for the anime version aside from the altered design of Lucy's bathroom are: