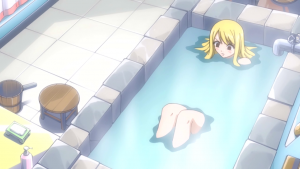 Lucy Heartfilia is shown soaking in her bathtub at her house while she is thinking about Natsu's request to meet her at night alone. As she interrupts this as him attempting to ask her out, she decides that she will turn him down gently. As she is next seen leaving the bathroom in a White Towel she is shown to be shaking from nervousness as she gets ready to meet him. 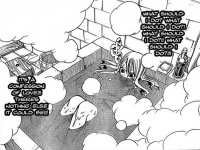 This episode is an adaptation of the Fairy Tail manga's 5th omake. The changes made from the manga version aside from the altered design of Lucy's bathroom are: