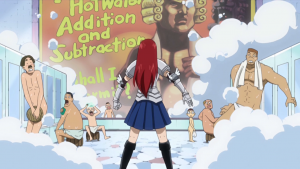 Erza Scarlet ends up barging into the males side of the Magnolia Public Bath from misleading directions she got from Evergreen after defeating her. Inside she ends up accidentally Peeping on many unnamed male bathers who seem embarrassed. 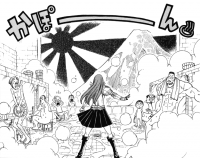 In the manga version, the child bather is not facing the side holding a Towel near his crotch and his penis is visible. The Bath House Mural is also different.