When coming back home, Lucy Heartfilia takes a Bath in her her bathroom. She is Towel Bathing as well as wearing a Towel on her head when Plue rises out of the bathwater in front of her legs which she is curling. She discovers that Plue deflates when he is in hot water. Afterwards the title card shows and then we see her in the Changing Room wearing a Green Towel looking in the Mirror. 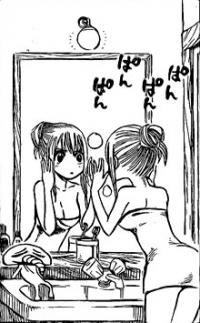 The scene is an adaptation to the 106th chapter of the Fairy Tail manga series. In the manga, this scene is off screen but dialogue is heard of Lucy finding out that Plue deflates in the bath. The only part of the scene that is shown in the manga is the off screen implication where we see Lucy wearing a towel in front of the Mirror and Plue being deflated on the sink. Lucy's green towel is white in the manga for the obvious reason of manga being black and white.