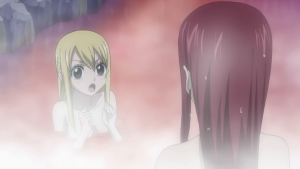 During a cutaway transition, Happy is shown taking a Bath in a Hot Spring. While staying at a hotel in the Spa Town of Hosenka, Lucy Heartfilia is seen bathing in the Onsen which has red bathwater. When she looks behind her, she sees that Erza Scarlet is behind her Standing In The Bath but she is wearing her armor. Lucy tells Erza that she is supposed to be naked while in the bath and Erza then decides to ex-quip out of her armor. As Lucy sees Erza's naked body she compliments her by saying she looks amazing naked, which Erza responds that she should probably start walking around the guild naked if her body is that amazing, shocking lucy.

Later on, at the Magnolia Public Bath, Elfman Strauss is seen exiting the building after an Off Screen Bath saying "public baths are manly". Next Lucy is seen leaving the building holding a pink Bath Bucket filled with bathing accessories saying that its nice to use the public bath once in a while despite having her own private bath in her house.

This bath scene is an adaptation of the 71st chapter of the Fairy Tail manga series. Despite having the same setting and taking place in the same part in the story, the scene had a significant amount of alterations. The bathing scenes plot was changed from a more casual scene of Lucy thinking about Loke and Erza was already in the bath naked from the start and has no dialouge. The environment also changed as in the manga it is a traditional hot spring setting surrounded by nature, the anime changed it to a giant hot spring surrounded by Japanese buildings and giant statues. The anime also made the hot spring's bathwater red.