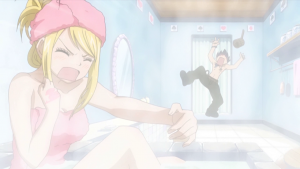 While Natsu Dragneel, Erza Scarlet, Gray Fullbuster and Happy go look for Lucy Heartfilia, they go to her house but can't find her so Gray assumes that she might be in the bath. Gray has a Dream Sequence where he imagines if he checked, she would be in there and call him a pervert for Peeping at her and get a Bath Bucket thrown at her. Gray then finds that Natsu already checked the bathroom and is in the bathtub with his clothes on and then sees that Erza was attempting to take a bath as she was already in a Towel and holding a bucket full of bathing accessories.

This scene is an adaptation of chapter 67 of the Fairy Tail manga but the manga version does not show any of the bathing scenes and instead the dream sequence scenario Gray envisions is only stated through dialogue. In the manga Natsu peeks his head from out of the Changing Room curtain saying Lucy's not in there rather than in the anime version where he is in Lucy's bathtub clothed confirming it. The scene of Erza wearing a towel attempting to bathe is original to the anime.