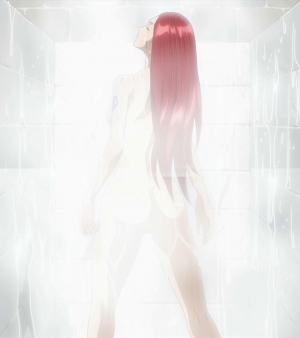 After retreating from a battle against the members of Phantom Lord, Erza Scarlet is seen having a Shower back at Fairy Tail. In the shower she flashes back to the battle of her comrades being defeated and gets angry and punches the wall when she has a flashback of the guild master being defeated. When the members of Fairy Tail feel the ground moving, Erza is outside with the rest of them wearing only a purple towel. When Erza sees that Phantom Lord is going to destroy Fairy Tail with a giant laser, she runs off dropping her towel and magical ex-quips into armor to try and stop it.

The original TV airing of this scene had more steam covering up Erza making her buttocks less visible and also making the bathing environment harder to make out. 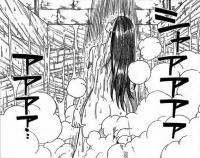 This shower scene was the anime adaption of the shower scene in chapter 51 of the manga. The differences between the anime and manga version was the Convenient Censoring from the presence of lots of steam. The flashbacks Erza has of the battle with the Phantom Lord members is also an element added into the anime version.