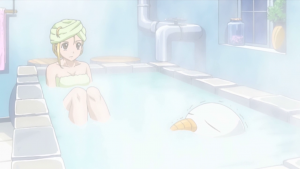 Erza Scarlet, Gray Fullbuster and Natsu Dragneel stay the night at Lucy Heartfilia's house for the night because of the recent attacks from Phantom Lord are causing members to stick together. Before having an Off Screen Bath, Erza tries to force Natsu and Gray to take a bath with her like in their childhood.

Sometime after Erza finishes her bath, Lucy takes one with Plue. During her bath, she was wearing a green Towel on both her body and her head. After her bath, Natsu was supposed to go next but was already sleeping so offered it to Gray next but seemed distracted looking at lucy's novel. Erza is seen sitting on Lucy's bed still in a pink towel saying that the bath was nice. Plue is also seen, deflated from bathing and getting fanned with a towel by Happy. 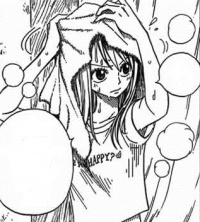 This episode was based off of chapter 47 of the manga titled Phantom Lord (ファントムロード) which was released in Weekly Shonen Magazine in 2007 and compiled in volume 6. Lucy's bath scene was Off Screen in the manga version. The manga shows us Lucy coming out in pajamas and drying her hair with a towel which isn't shown in the anime version. While it was still implied that Erza, Natsu and Gray bathed together before Lucy got in, the manga doesn't show us Erza wearing a towel and instead she is already in her pajamas that she ex-quipped into.