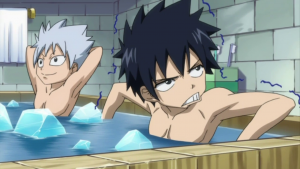 In a flashback of Gray Fullbuster and Lyon Bastia's childhood training under Ur, one of the moments of their training montage shows both Gray and Lyon having a Cold Bath together in a square wooden bathtub in Ur's house.

The scene first aired in Japan on January 25th, 2010 on TV Tokyo. The scene was first put on DVD in Japan as part of the 4th volume of the Fairy Tail DVDs. The episode's first English release was part of Funimation's Fairy Tail Season 2 part 1 DVD set released on December 27th, 2011. 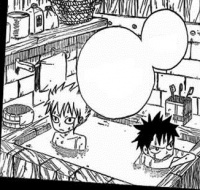 This bath scene was the anime adaption of the bath scene in chapter 37 of the manga. The differences between the anime and manga version was that the camera angle difference and that there was blocks of ice indicating it to be a cold bath as part of their training as opposed to the manga version of it simply being a normal bath meant to be an example of their home life. Lyon's positioning is changed slightly as he is more up to the back near gray while in the manga, he was more forward. Lyon's facial expression is more happy when in the manga he wasn't shown as happy.