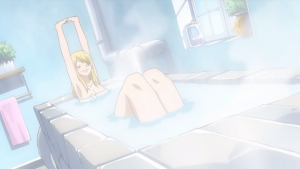 While Lucy Heartfilia is giving a narration about the town of Magnolia, it shifts to her having a her morning bath in the stone bathtub in her new house. While bathing, she is wearing a towel in the bath while Stretching her arms and curling her legs. The next scene shows her out of the bath and wearing a white Towel and drying her hair with another white towel as she has an inner monologue explaining the rest of qualities of her new house. She then leaps into the living room still in her towel only to find Natsu Dragneel and Happy the cat invading her house getting her angry and frustrated.

The scene first aired in Japan on October 26th, 2009 on TV Tokyo. The scene was first put on DVD in Japan as part of the first volume of the Fairy Tail DVDs. The episode's first English release was part of Funimation's Fairy Tail Season 1 part 1 DVD set released on November 22nd, 2011.

The part of Lucy bathing was shown in the preview for this episode at the end of episode 2. 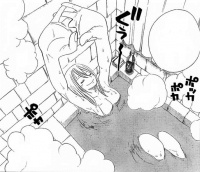 This bath scene is an adaptation of the 4th chapter of the Fairy Tail manga series. The changes made from the manga version aside from the altered design of Lucy's bathroom are: