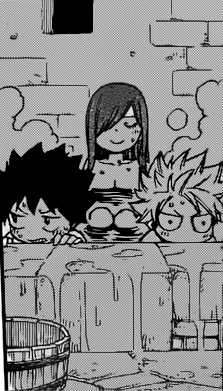 There is a Flashback Bathing Scene of Erza Scarlet, Natsu Dragneel and Gray Fullbuster sharing a Bath together when they were younger.

This chapter was first released on October 26th, 2016 in Weekly Shonen Magazine. The chapter was compiled into the 59th volume released in Japan on December 16, 2016. It was released in English on the 32nd volume by Del Ray Manga released on March 28, 2017.

This chapter was adapted into the 310th episode of the Fairy Tail anime series. It is almost identical being only one image but the picture doesn't go far down enough to show the Bath Bucket and the height isn't high enough to show the window above the tub. The tub also seems slightly more narrow.