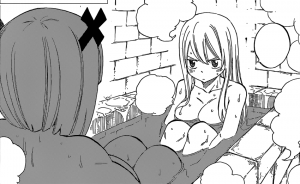 Continuing from last chapter, Lucy Heartfilia has now joined Brandish's Bath in the Undermount Bathtub. Both of them are Leg Curling while Brandish who is also Arm Resting asks Lucy to wear a pair of cat ears which Lucy obeys so Brandish doesn't shrink the town and responds by saying that it looks cute. Brandish then gets out of the tub and asks Lucy to help wash her back. Brandish who is now sitting on a Bath Stool is getting her back washed by Lucy with a Wash Cloth and Soap. Lucy then attempts to stab Brandish while her guard is down with the broken key to Aquarius but Brandish then asks Lucy if she is Layla's daughter which makes her stop and question how she knows about her mother. Lucy then realizes her house is shrinking and quickly runs out of the Ofuro all the way outside while Brandish was still sitting soapy on the stool. Once Lucy makes it outside of the house that has now shrunken down small, she is still naked and wearing the cat ears while Brandish is there fully clothed and begins to fight Lucy just as Cana Alberona shows up and thinks Lucy was intentionally walking around naked with cat ears on just before she gets dressed when summoning Aries and gets the Aries dress on.

This chapter was first released on October 21st, 2015 in Weekly Shonen Magazine #47.

Part of this scene was first adapted into the 24th opening credits of the Fairy Tail anime and then the full scene was adapted in the 292nd episode. The anime version tones down a significant amount of the fanservice. The anime comfirms that the Wash Cloth Lucy washes Brandish's back with is a Blue Towel.