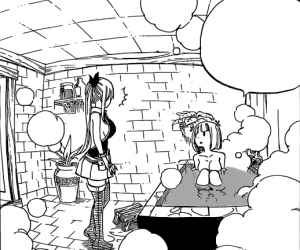 Continuing from last chapter, Brandish is still taking a Bath and Leg Curling in the Undermount Bathtub in Lucy Heartfilia's Ofuro and Lucy asks her why she is in her house and Brandish simply responds by asking her join. Lucy gets mad at her for invading her house and her bath without permission and then asking to join her but then Brandish responds firmly by telling her to not make her repeat herself and puts her bit sized male follower Marin Hollow who was around away and then says to join since there is no excuse now and that she has the power to shrink the whole town if she doesn't obey her and snaps her fingers shrinking the neighbors house as an example. Brandish is then seen Arm Resting and tells Lucy that she has one last chance to obey and get into the tub with her. Lucy then starts Stripping and lets her hair down to get into the bath with Brandish.

This chapter was first released on October 14th, 2015 in Weekly Shonen Magazine #46.

This episode was adapted into the 292nd episode of the Fairy Tail anime.