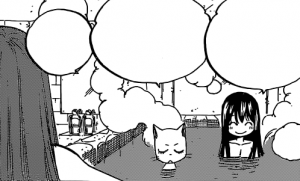 While the entire town of Magnolia is evacuated other than the Fairy Tail guild members to prepare for the attack of the Alvarez Empire, Wendy Marvell, Erza Scarlet and Charle are taking a Bath at the Fairy Hills Public Bath. Erza who is Arm Resting and curling her legs tells Wendy that Crime Sorcière will be assisting them. As Erza stands up and just about ready to get out of the Undermount Bathtub, Wendy gives Erza a hug from behind thanking her for being the one to invite her to Fairy Tail after her previous guild Cait Shelter closed. Erza then tells Wendy that she has grown into a fine wizard that the guild is proud of. Later on as a fleet from the Alvarez Empire approaches, Erza and Wendy are seen to still be in the bath and looking out the window at it.

This chapter was first released on September 23rd, 2015 in Weekly Shonen Magazine #43.

This chapter was adapted into the 291st episode of the Fairy Tail anime series.