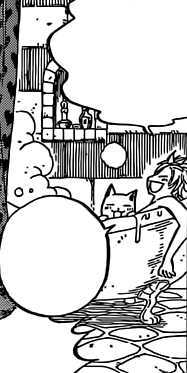 While staying the night at Lucy Heartfilia's new apartment in Crocus, Natsu Dragneel takes a Bath in her Clawfoot Slipper Bathtub with Happy after getting a haircut from Cancer. In the tub, Natsu says that it feels really nice and asks Lucy if she wants to join with her rejecting it by yelling "Like Hell".

This chapter was first released on February 11th, 2015 in Weekly Shonen Magazine.

This chapter was adapted into the 277th episode of the Fairy Tail anime series.