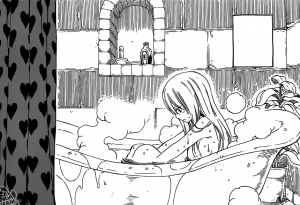 The chapter starts taking place a year later and Lucy Heartfilia is seen to currently be staying in the city of Crocus and wakes up and starts taking a Shower and Singing after brushing her teeth. Later on night when she gets back after her job covering the Grand Magic Games for the Weekly Sorcerer Magazine, she is seen Stripping her clothes off and then taking a Bath in the Clawfoot Slipper Bathtub in her room. While in the bath, Lucy is seen Leg Curling and depressed about how she hasn't seen any of her former guild comrades for a year as she sinks her head deeper into the water and starts Blowing Bubbles. She then starts throwing a fit and splashing around in the tub, kicking her legs and throwing her arms up and and down. Her neighbor in the next room over tells Lucy that they can hear her and to keep it down. Lucy is then seen getting out of the Bathtub and drying herself off then while wearing a Towel, walks over to a wall covered with photos newspaper clippings of all the news and information she has found about where all the guild members have gone.

This chapter was first released on February 4th in Weekly Shonen Magazine.

This scene was adapted into the 276th episode of the Fairy Tail anime series. The anime added scenes of Lucy Heartfilia wearing a towel after finishing her shower at the beginning. Lucy's bathroom has an extra Shower Curtain in the anime one which is green and on the other side of her heart pattern one and her Shower Head is actually shown. Lucy's Slipper Bathtub is only single sided in the anime rather than being double sided like in the manga. The slipper bathtub which is a Clawfoot Bathtub in the manga is changed to a Flat Bathtub due to an animation error in the following episode which shows the tub's full view. The bathwater Lucy is bathing in is revealed to be green. When Lucy is shown getting out of the tub, the manga is a zoomed in not showing the Convenient Censoring of her hair covering her breasts and her arm holding onto the rim covers her crotch. There is a full body shot of Lucy naked walking into the changing room and has a towel drying her hair while the anime just shows her head. The anime gives Lucy another Shower scene the next morning which just uses Recycled Footage of the shower from the beginning of the episode.