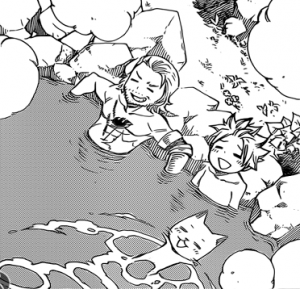 During a training montage between Natsu Dragneel and Gildartz Clive, one of the shots show both of them Skinny Dipping in a Hot Spring together with Happy. After they both get out they start arguing while Happy is still bathing.

This chapter was first released on January 28th, 2015 in Weekly Shonen Magazine.

This scene was skipped over in the Fairy Tail anime series but it would have been in episode 277 which is where the rest of this chapter was adapted as a Flashback.