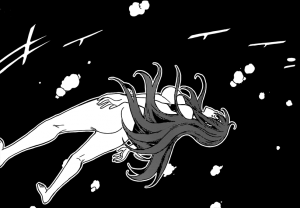 While Erza Scarlet is deep in a fight against Kyouka, she loses consciousness and is briefly seen naked Skinny Dipping in a deep subspace filled with liquid.

This scene was adapted in the 259th episode of the anime. The anime version of this scene does not have her naked and instead wearing her torn up bra and panties that she already had on in the fight. The background in the dream is also different with it being white and filled with circular bubbles rather than the black background in the manga. Erza's butt doesn't appear as round as the manga and her breast size appears smaller as well.