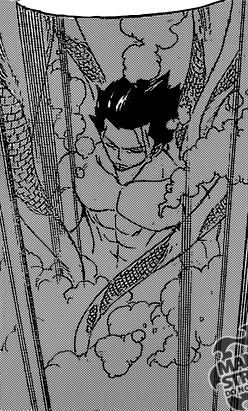 During a fight between Silver Fullbuster and Gray Fullbuster, Silver tells Gray a story of how he was originally the demon Deliora and was transferred into Silver's body which then shows a Flashback Bathing Scene of Silver in a Tube Bath.

This chapter was first released on July 2nd, 2014 in Weekly Shonen Magazine.

This scene was skipped over in the Fairy Tail anime series but would have been in episode 251.