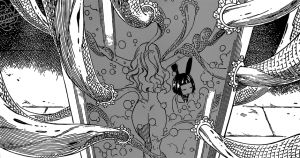 Mirajane Strauss is still unconscious in a Tube Bath at the Tartarus guild's lab. Lamy who is still watching over her is insulting her telling her that she wants to turn her into the ugliest demon possible. Mirajane then wakes up and breaks out of the tube bath standing in front of Lamy naked telling her that she can't do that since she is already a demon.

This chapter was first released on February 19th, 2014 in Weekly Shonen Magazine.

This chapter was adapted into the 241st episode of the Fairy Tail anime series. The anime version has a lot more camera angles and is longer than the manga version.