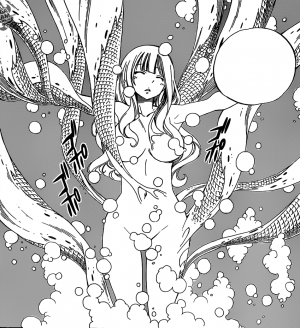 Mirajane Strauss is shown unconscious in a Tube Bath at the Tartarus guild after being captured earlier on. She is being watched over by Lamy and was going to be turned into a demon.

This chapter was first released on February 12th, 2014 in Weekly Shonen Magazine. 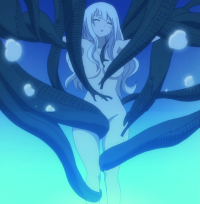 This scene was adapted into the 240th episode of the Fairy Tail anime series. The Tube Bath scene gets an early anime exclusive start in episode 238 but the actual portion of the scene that this chapter is based off starts in episode 240. The anime version has more of Mirajane's naked body covered up by the tentacles tying her up rather than in the manga where bubbles are covering her private areas.