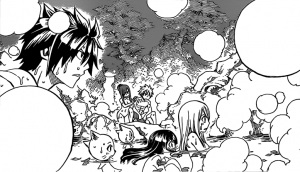 Later at night, Erza, Lucy, Wendy and Charle all head to a hot springs near Warrod Sequen's house. Marvelling at the beauty of the location and soaking in the water to relax, the girls take a moment to feel bad for Natsu and Gray, whom they believe have no interest in such things. To their shock, Natsu suddenly speaks, both him and Gray having been sitting in the water watching them the entire time. As Lucy and Wendy scold them for being in their section of the hot spring, the two males remark that they were actually there first; Warrod also appears and gets into the bath, stating that it is unisex. Still uncomfortable, Lucy tries to convince the men to get out, though Gray states that they've all seen each other naked enough times to be past such embarrassment. Agreeing, Erza moves to try wash Gray and Natsu, who both startle and comment that she is a little too comfortable.

Interrupting the group, Warrod surprises them by showing them the Fairy Tail guild mark he has tattooed on his left forearm, revealing to them his identity as one of the founding members of Fairy Tail. Shocked, the group realize why Makarov was so nervous about the request, whilst Warrod comments that he is happy that Mavis' spirit of comradeship still lives on in the guild to this day, all the while reciting the lyrics to a song Mavis once sung about Fairy Tail.

This chapter was first released on October 16th, 2013 in Weekly Shonen Magazine.

In the anime adaptation, this scene was replaced by a significantly different bathing scene in this chapter's adaptation in episode 233. The anime version has a shorter scene that only depicts Lucy Heartfilia, Erza Scarlet, Wendy Marvell and Charle bathing in a different looking Hot Spring with no involvement of the male characters trying to join in. However, the 8th OVA takes most of the interactions from this scene and incorporated them into an extra anime original bath scene that takes place in Fairy Tail's Public Bath after the events of the omake 37 adaptation occur. Gray Fullbuster, Wendy Marvell and Charle are not involved in this new replacement scene though.