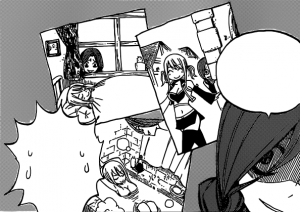 After Lucy Heartfilia and Wendy Marvell get saved by Flare Corona who says that she has been stalking Lucy ever since the last time they met showing a series of Flashback images of her watching Lucy during her daily activities one of the being taking a Bath which Flare is shown watching from the ceiling. Flare then tells Lucy that she was just kidding but due to the nature we already know of the her already following Lucy on many occasions and the specific flashback images we see it's possible that she was lying and really was stalking Lucy.

This chapter was first released on August 21st, 2013 in Weekly Shonen Magazine.

The bathing scene was adapted into the 230th episode of the Fairy Tail anime series. The differences in the anime are: