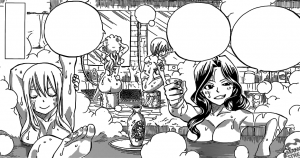 Fairy Tail chapter 341 is the 23rd bathing scene in the Fairy Tail manga.

The chapter begins with Mirajane Strauss, Lisanna Strauss, Lucy Heartfilia, Cana Alberona and Levy McGarden bathing in the new Fairy Tail Guild Bath. Mirajane and Lisanna are both outside of the bath sitting on Bath Stools with Mirajane Shampooing her hair and Lisanna Arm Washing with a Sponge. Lucy is in the bathwater crossing her legs and stretching her arm while Cana who is next to her is resting her arm on the edge of the bath and having a Drink. Levy who is in the bathwater with them tells them that Jet and Droy let her have the day off and that they were going to handle their mission themselves.

As Mirajane and Lisanna rinse off and get ready to get into the bath with them, Lucy says that Erza Scarlet and Wendy Marvell went off to do a job by themselves as well which causes Lisanna to question who the red haired girl in the neighboring Bathing Pool is. The red haired girl stands up in the bath and reveals herself to be Flare Corona a former member of the enemy guild, Raven Tail who has followed Lucy. Cana quickly busts out of the bathwater to try and attack her but Lucy grabs a hold of her to stop her and the both end up Slipping. Flare tells them that they are no longer enemies and uses her hair to grab a hold of Cana and start washing her. Juvia Lockser who is in the Changing Room with only a Towel on getting ready to join them in the bath hides behind the door and watches all of this. Lucy offers to let Flare join Fairy Tail after her emotional speech but then she says that she doesn't want to join Fairy Tail shocking everyone.

This chapter was first released on July 17th, 2013 in Weekly Shonen Magazine. It was put in volume 40.

This chapter was adapted into the 227th episode of the Fairy Tail anime series. The anime adaptation adds extra segments showing the males side of the bath where we see Warren Rocko, Max Alores, Romeo Conbolt, Elfman Strauss, Laxus Dreyar, Freed Justine and Bickslow bathing.