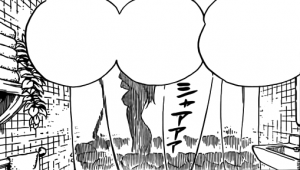 At night in the Honeybone Lodge Bathroom, Wendy Marvell and Charle are drying off and getting dressed after some Off Screen Bathing. Lucy Heartfilia is seen Stripping while they talk to her saying that she could have possessed all twelve Zodiac Keys but Lucy tells them that she didn't want to break the bond between Yukino and her Spirits. Lucy then seen standing in the Clawfoot Bathtub behind the Shower Curtain taking a Shower.

The scene of Wendy and Charle drying off after bathing off screen and talking to Lucy while she is stripping are kept intact of the episode 165 of the anime adaptation but the actual shower scene with Lucy was left out making that off screen in the anime. The anime also has less shots of Lucy stripping but shows more detail of the bathroom they are in and reveals that the shower curtain is blue.