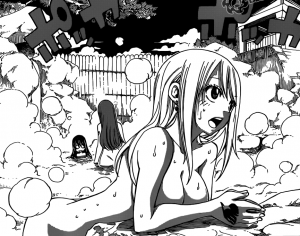 After a day of training on the beach, Lucy Heartfilia, Erza Scarlet, Wendy Marvell, Levy McGarden, Juvia Lockser and the cats Happy and Charle have a bath together at a local Onsen. While the girls are bathing on their side, Natsu Dragneel, Gray Fullbuster and Levy's partners Jet and Droy are along the gate on the males side getting ready to Peep on the ladies. Back on the girls side, Levy covers her breasts asking why Happy is bathing on there side since he is a male cat and then Juvia who is self conscious about her body is shown hiding behind a rock in the spring along side a moneky. Lucy who is leaning towards the edge of the spring is gazing at the stars and tells everyone that the sky is full where everyone decides to look at the stars while it shifts to the many other training parties in the guild looking at the same stars at the moment.

Once the moment is over, Erza senses the males trying to sneak a peek at them from the other side of the gate and throws four Sais at them. The commotion causes Lucy to pick up a Towel while Levy and Wendy sink to a corner covering their chests as Juvia stands up in anger saying that Gray would never do something like that. Erza then gets the idea to invite the guys over and bathe together and starts walking over towards the gate but Lucy who is shown covering her breats puts her hand in front of Erza's breasts and opposes the idea. The chapter then ends showing the four males on the other side injured.

This chapter was first released on November 30th, 2011 in Weekly Shonen Magazine. On February 17th, 2012 the chapter was printed and published by Kodansha in the 31st manga volume released in Japan. The scene was officially translated and released in North America in volume 31 published by Del Rey Manga on October 29th, 2013.

The first panel of this chapter's bathing scene is shown in a advertisement for the 4th OVA which adapted this scene.

The scene that replaces this in the TV anime

The OVA version of this scene

In the TV series, the scene was skipped in episode 153 but the part where all the girls gaze up at the stars was kept but in a different setting of all of them in Bathrobes after finishing their bath Off Screen.

The actual scene itself was shown in the 4th OVA where it was longer and more gratuitous than its manga counterpart. Some of the differences in the anime version are that Happy is not bathing with the girls and instead is hanging out the guys on the males side. Mavis Vermillion is also present outside of the bath watching over everyone unnoticed where she sees all of the breasts of the girls and feels jealous. The looking at the stars part was left out since it happened after they finished bathing in the TV anime and instead the girls have a lengthy discussion with one of the topics being about how Lucy and Natsu are good friends. Lucy also tells the story of the Natsu's House Omake in the middle of the scene through a Flashblack. The OVA ends on an extra scene of Mavis enjoying a bath in the spring after everyone has left.