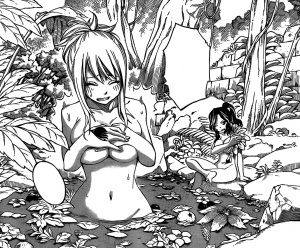 During the aftermath of the battle with Grimoire Heart, Lucy Heartfilia and Cana Alberona go Skinny Dipping while they are Bath Bonding in an Herbal Spring distance away from the camp to heal their injuries. Lucy is shown slowly submerging her body into the spring while Cana sitting on the edge with only one of legs in is scrubbing herself with some of the plants. As Lucy is still shown having a hard time getting in, she asks Cana if right hand is ok from when she has recieved "Fairy Glitter" which then Cana is now shown inside of the spring holding her right hand showing that it is ok now and that it was only for a short time. As the two soak in the spring together, Cana apologizes to Lucy for ditching her and trying to complete the S-Class Trial instead of helping her comrades admitting that betraying her comrades gave her a horrible feeling while Lucy forgives her and wasn't mad about it.

This chapter was first released on September 21st, 2011 in Weekly Shonen Magazine. It was put in volume 30 released in Japan on December 16th, 2011. It's English translation was released in the 30th volume on September 24th, 2013.

In the anime adaptation, both of the girls have their bodies submerged in the water the whole time not having anything below their shoulders visible. The medicated spring is also changed to a fancy outdoor Bathing Pool-like fountain rather than being just a simple natural outdoor spring. The anime comfirms that the bathwater is green.