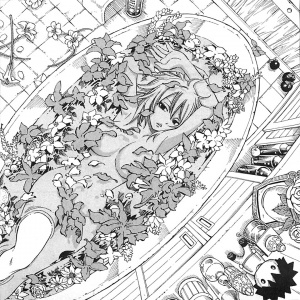 Fairy Tail chapter 229 is the 17th bathing scene in the Fairy Tail manga.

Juvia Lockser is shown bathing Underwater in an Unspecified Freestanding Bathtub with only one of her legs sticking out on the chapter cover. Along with the bathwater, many flowers and plants are in the bathtub as well covering Juvia's explicit areas. Nothing bathing related happens in the actual chapters story.

This specific bathing scene did not get adapted in the anime in any form and is exclusive to the manga.