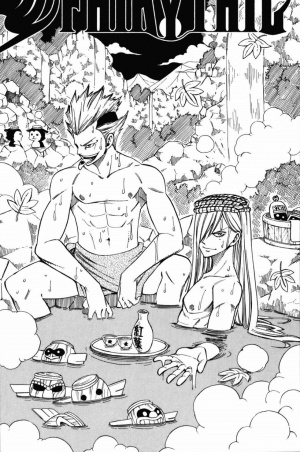 Freed Justine and Bickslow are shown bathing in a Hot Spring on the chapter cover. Freed inside the bathwater with a Wash Cloth on his head and one of his hands coming out of the water, while Bickslow is sitting on the edge and has his feet in the water while wearing a Towel with his head turned to the side on sticking his tongue out. Next to the hot spring is a wooden bucket with bottles of body wash and shampoo in it and inside the hot spring are Bickslows puppets, a leaf and a tray with Sake on it while in the background is a forest with two other springs one has a waterfall and two rodent creatures are seen bathing in the other one. Nothing bathing related happens in the actual chapters story.

This chapter was published in Weekly Shounen Magazine on November 24th, 2010 and was released in volume 25 in Japan on February 17, 2010. The volume this chapter is in was released in North America on April 23, 2013 by Del Ray Manga.

This specific bathing scene did not get adapted in the anime in any form and is exclusive to the manga.