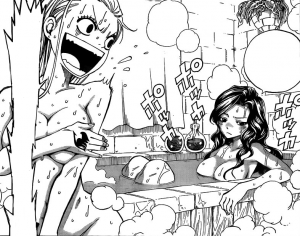 The chapter begins with Lucy Heartfilia back at her house having a Shower and Shampooing her hair. As she is rinsing the shampoo off her hair under the shower, she says how happy she is to finally be back at her own house, which then she hears Cana Alberona say that she should live there too, surprising Lucy as she covers her private areas and looks behind her to see Cana bathing in the bathtub. While Lucy stares surprised, Cana is shown Leg Stretching]] as she asks Lucy if she has any booze around. Lucy then gets into the small bathtub and starts Bath Bonding with Cana. During the conversation Cana asks about how things went with Lucy's father after the Phantom Lord incident and that Cana is thinking about leaving the Fairy Tail guild. At the end of the bath scene, Cana Stands Up.

This scene was adapted into the 97th episode of the Fairy Tail anime series. The changes made for the anime version aside from the altered design of Lucy's bathroom are: