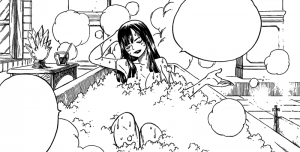 During the aftermath of the Tower or Heaven arc and Jellal Fernandes defeat, Ultear Milkovich is seen taking a Bubble Bath and talking to her guilds master, Hades using a Communication Lacrima Crystal. During their conversation talking about Jellal being used and Zeref's whereabouts, Ultear is seen Crossing her legs. Afterwards, Ultear is seen out of the bathtub and getting ready to cover herself with a Towel as her back is exposed showing the marking of her guild, Grimoire Heart.

This chapter was first released in 2008 in Weekly Shonen Magazine. In December 17, 2008 the chapters were printed and published by Kodansha in the thirteenth manga volume released in Japan. The scene was officially translated and released in North America in volume 10 published by Del Rey Manga on May 10, 2011.

This bath scene was unfortunately left out in the anime adaptation. If it was adapted, it would have been in episode 41.