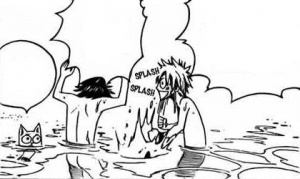 While the team is having fun at the beach at a resort hotel, Gray Fullbuster is seen Skinny Dipping in the ocean talking to Natsu Dragneel while Happy who is also in the water points out that he needs to put some shorts on. Its possible this may have been a Clothing Loss because of Gray's stripping habit. Juvia Lockser who is hiding behind a Palm Tree in the distance is shown spying on Gray during this moment with a loving look admiring Gray for being so daring. Gray apparently gets his Swimsuit back on as he is next seen wearing them in a beach volleyball game.

This chapter was first released on January 23rd, 2008 in Weekly Shonen Magazine. In May 16th, 2008 the chapters were printed and published by Kodansha in the tenth manga volume released in Japan. The scene was officially translated and released in North America in volume 10 published by Del Rey Manga on March 23rd, 2010.

This chapter was adapted into the 33rd episode of the Fairy Tail anime series but this specific skinny dipping scene was cut from the episode and the scene remains exclusive to the manga.