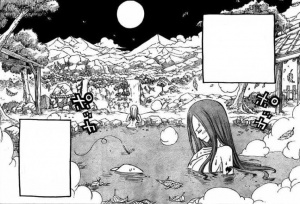 Erza Scarlet and Lucy Heartfilia are shown having a bath in a Hot Spring at an inn they were staying at in the Spa Town Hosenka after finishing on of the missions they went on for the guild. During the bath, a narrative of Lucy shows describing that they were staying at this inn after finishing the assignment quickly. Leaves are shown falling into the hot spring while Lucy who is looking out from one of the Hot Springs edges and asks to herself what the deal is with Loke while Erza is seen in the background splashing water at a dragon fly. After the girls finishing bathing they wear spa robes and participate in a pillow fight with Natsu Dragneel and Gray Fullbuster.

This chapter was first released on December 26th, 2007 in Weekly Shonen Magazine. In March 17, 2008 the chapters were printed and published by Kodansha in the ninth manga volume released in Japan. The scene was officially translated and released in North America in volume 9 published by Del Rey Manga on December 29, 2009.

This bath scene was adapted into the 31st episode of the anime. Despite having the same setting and taking place in the same part in the story, the scene had a significant amount of alterations. The bathing scenes plot was changed into a comical scene about Lucy criticizing Erza for wearing armor in the bath. The environment also changed as in the manga it is a traditional hot spring setting surrounded by nature, the anime changed it to a giant hot spring surrounded by Japanese buildings and giant statues. The anime also made the hot spring's bathwater red.